Last week’s earthquake in northern Japan reminded me of an interesting pet peeve of a friend of mine: she hates the word temblor. Before she brought it to my attention, it had never really occurred to me to be bothered by it, but now I can’t help but notice it and be annoyed anytime there’s a news story about an earthquake. Her complaint is that it’s basically a made-up word that only journalists use, and it seems she’s essentially right.

A quick search on Mark Davies’ Corpus of Contemporary American English shows that temblor occurs just over twice as often in newspaper writing as in magazine writing, and more than three times as frequently in newspaper writing as in fiction. It’s effectively nonexistent in academic writing—the only two hits in COCA are actually in Spanish contexts, as are three of the hits under fiction. It’s also worth noting that all of the spoken examples are from news programs. The following chart shows its frequency per million words. 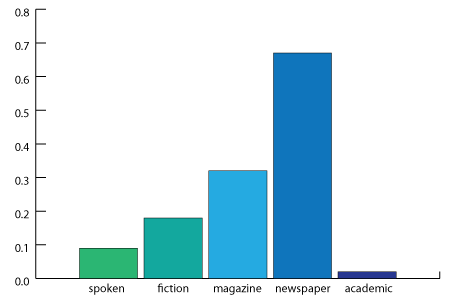 So what’s to explain the strange distribution of this word? I strongly suspect it’s the doing of what John E. McIntyre calls “the dear old, so frequently misguided, Associated Press Stylebook.” I only have a copy of the 2004 edition (which my wife picked up at a yard sale for 50 cents—don’t worry, I wouldn’t waste good money on it), but the entry for temblor (yes, there’s actually an entry for it) merely refers one to earthquakes. That entry goes on for a page and a half about earthquake magnitudes and notable earthquakes of the past before noting that “the word temblor (not tremblor) is a synonym for earthquake.”

I don’t understand why the AP Stylebook needs to point out spelling and synonymy—I thought those were the jobs of dictionaries and thesauruses, respectively—but I find it interesting that it doesn’t list any other synonyms. Thesaurus.com lists convulsion, fault, macroseism, microseism, movement, quake, quaker, seimicity, seism, seismism, shake, shock, slip, temblor, trembler, undulation, and upheaval, though obviously not all of these are equally acceptable synonyms.

So why does temblor get singled out? I honestly don’t know. I do know that journalists are fond of learning synonyms to avoid tiring out common words, and I know that at least some journalists take the practice to unreasonable levels, such as the teacher who made her students memorize 120 synonyms for said. Whatever the reason, journalists seem to have latched on to temblor, though few others outside the fields of newspaper and magazine writing have picked it up.

Actually, as one who does quite a bit of reading in geology and seismology, I can assure you that ‘temblor’ isn’t exclusive to journalists. 🙂

When the Portolà expedition came across what today is the Santa Ana River in July of 1769, they named it el rio de Los Temblores, “the River of the Earthquakes”, for the three strong earthquake shocks they experienced while camped there.

That’s a well-known factoid among local geographers; I suspect ‘temblor’ may be more common in Southern California seismological circles because of that connection.

I get annoyed by “temblor”, too. I once tweeted to @FakeAPStylebook that it should be “earthquake” on first reference, “temblor” on second, and “quake” thereafter.

GlenBlank: The OED says that temblor came from Southwestern Spanish, so it’s no surprise that it’s still more common there. I wasn’t aware that it was used in the academic literature, though. You learn something every day.

Neal: That’s probably not far off from the truth.

I’m a journalist and also a fiction writer. I realize the word is a little stuffy in its current use, but I think it’s quite beautiful. Still, I might think about where considering the life behind it.

I have to admit that there’s nothing wrong with the word temblor per se. What grates on people is the extreme overuse in a very particular genre. It’s always good to be aware of those things when choosing the right word.

I am a working seismologist (from SoCal, GlenBlank!) and I can assure you that no current seismologist or geologist ever uses ‘temblor’ in English. Terms used are ‘earthquake’, ‘event’, ‘quake’, and in specific contexts, ‘(fault) rupture’ and (when referring to more than one event) ‘seismicity’. So yes, journalists’ obsession with ‘temblor’ is silly and proves they don’t bother to read anything remotely scientific.

Temblor, like or not its a thing. | Dr. Geophysics' Weblog

It’s tremor in Spanish, and English publication journalists should stop using it.