I’ve been thinking a lot about style guides lately, and I decided that what the world really needs right now is the definitive style guide alignment chart. I posted a version on Twitter the other day, but I wanted to do a slightly expanded version here. (Quotes are taken from easydamus.com.) 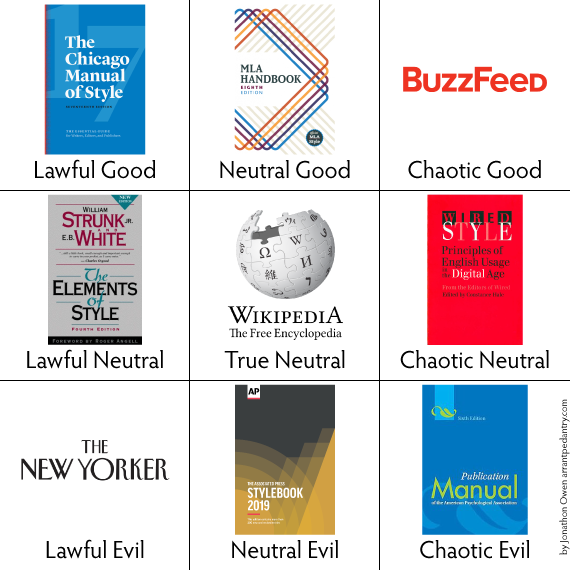 A lawful good character “combines a commitment to oppose evil with the discipline to fight relentlessly.” And boy howdy, is Chicago relentless—the thing is over 1,100 pages! Even if you use it every day in your job as an editor, there are probably entire chapters that you’ve never looked at. But it’s there with its recommendations just in case.

“A neutral good character does the best that a good person can do.” Look, the MLA Handbook certainly tries to do what’s right, even if it can’t make up its mind sometimes. Remember when it said you should specify whether a source was print or web, as if that wasn’t obvious from context, and then it took that rule out in the next edition? Enough said.

“A chaotic good character acts as his conscience directs him with little regard for what others expect of him.” Buzzfeed style is guided by a strong moral compass but doesn’t feel beholden to a lot of traditional rules. It has great entries on gender, race, and disability and would probably recommend singular “they” in that last sentence. It also has entries on celebricat (a celebrity cat), dadbod, and milkshake duck, because that’s the internet for you.

Lawful Neutral: The Elements of Style

“A lawful neutral character acts as law, tradition, or a personal code directs her.” The Elements of Style, a.k.a. Strunk & White, certainly upholds a lot of laws and traditions. Are they good laws? Look, I don’t see how that’s relevant. The point is that if you follow its diktats by omitting needless words and going which hunting, your writing will supposedly be just like E. B. White’s.

A true neutral character “doesn’t feel strongly one way or the other when it comes to good vs. evil or law vs. chaos.” Wikipedia doesn’t care for your edit wars. There are lots of acceptable style choices, whether you prefer American or British English. Just pick a style and stick with it.

A chaotic neutral character “avoids authority, resents restrictions, and challenges traditions.” Wired Style has a chapter called “Be Elite” and another called “Screw the Rules.” The first edition is also printed on day-glow yellow paper, because screw your eyes too. It also has a chapter called “Anticipate the Future” but probably didn’t anticipate that it would go out of print twenty years ago.

A lawful evil character “plays by the rules but without mercy or compassion.” The New Yorker uses jarring diereses to prevent misreading of words that no one has trouble reading, and it doubles consonants in words like focussed because it said so, that’s why. It also unnecessarily sets off certain phrases with commas based on a hyperliteral idea of what restrictive and nonrestrictive mean. Tell me that’s not mercilessly evil.

“A neutral evil villain does whatever she can get away with.” The AP Stylebook used to say that two things couldn’t collide unless they were both in motion, and it also used to recommend against not only split infinitives but also adverbs placed in the middle of verb phrases, which is the normal place to put them. They only abandoned those rules when John McIntyre finally called them on that BS.

A chaotic evil character is “arbitrarily violent” and “unpredictable.” Have you ever seen APA-style references? Some titles are in title case, while others are in sentence case. And, for reasons I can’t understand, volume numbers are italicized but issues numbers aren’t, even though there’s no space between them. “Arbitrarily violent” is the best description of that mess that I’ve seen.

Naturally, there will be some disagreement over the placement of some entries. I’ve also had a lot of calls to include Bluebook, with most people wanting to put it somewhere on the evil axis, while others have wanted to include The Yahoo! Style Guide, The Microsoft Manual of Style, or AMA Manual of Style. I’ve decided that I’m probably going to have to do a yearly update to add new entries or move some to more fitting spots. In the meantime, if you’ve got opinions—and I’m sure you do—feel free to chime in below.

That's My Name; Please Wear It Out

That's My Name; Please Wear It Out

Get 20 Percent Off at the Arrant Pedantry Store

Get 20 Percent Off at the Arrant Pedantry Store

I greatly prefer the loving embrace of the GSA style guide, which is pretty well laid out here: https://libguides.com.edu/c.php?g=649323&p=4554576 and has reference-specific guidelines here: https://www.geosociety.org/documents/gsa/pubs/GSA_RefGuide_Examples.pdf

It most likely belongs in Chaotic Good, because I refuse to believe that anyone in geology is truly Lawful.

The New Yorker, lawful? Ha! They veer randomly between extreme Anglophilia (making American writers say “has got”) and extreme Anglophobia (changing Oliver Sacks’s “sulphur” to “sulfur” against his express wishes). And they’re finicky about some words, but laissez-faire about other common words, such as “kilometer”, for which they apparently have no fixed style: they run about 10% “kilometer” to 90% “kilometre”, which is much higher than random error could account for. And no, “kilometer” isn’t limited to direct quotes, and it doesn’t depend on the subject of the story. Weird.

This is one of the greatest and most necessary things I have seen on the internet. I think I’m apotheosising. Well done!

I’m not sure that the word “neutral” can be neutral here as our judgement of style guides is inevitably subjective. But good fun, thank you all!

As I sit at my desk, within reach are a glass of whiskey, an M1903 Springfield, and the Chicago Manual of Style. I feel like such a cliché.

The Elements of Style doesn’t even follow its own style guidelines consistently, and therefore should be considered for “chaotic” alignment. Exhorting others follow a set of arbitrary “laws” that you yourself disregard when convenient isn’t lawful; it’s a brutal abuse of power and status.

I’d place Elements somewhere between “chaotic evil” and “doesn’t even deserve a spot on a chart with actual style guides”.

Where would you place Words Into Type? I always liked it and wish they’d do a new edition for the post-1974 world.

I’m not familiar enough with it, sadly, so I’m not sure where it would go. But from what little I’ve seen of it, I’d say it’s most reminiscent of Chicago, so probably lawful good.