Book Review: The Sense of Style

Full disclosure: I received an advance review copy of this book from the publisher, Viking. 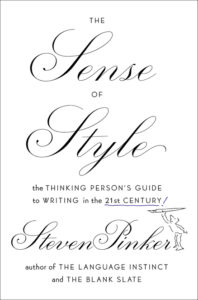 I was intrigued when I first heard that Steven Pinker, the linguist and cognitive scientist, was writing a book on style. I’ve really enjoyed some of his other books, such as The Stuff of Thought

, but wasn’t this the guy who had dedicated an entire chapter of The Language Instinct

to bashing prescriptivists, calling them a bunch of “kibbitzers and nudniks” who peddle “bits of folklore that originated for screwball reasons several hundred years ago”? But even though it can be satisfying to bash nonsensical grammar rules, I’ve also long felt that linguists could offer some valuable insight into the field of writing. I was hopeful that Pinker would have some interesting things to say about writing, and he didn’t disappoint me.

I should be clear, though, that this is not your ordinary book on writing advice. It isn’t a quick reference book full of rules and examples of what to do and what not to do (for which I recommend Joseph Williams’s excellent Style). It’s something deeper and more substantial than that—it’s a thorough examination of what makes good writing good and why writing well is so hard.

Pinker starts by reverse-engineering some of his favorite passages of prose, taking them apart piece by piece to see what makes them tick. Though it’s an interesting exercise, it gets a little tedious at times as he picks passages apart. However, his point is valuable: good writing can only come from good reading, which means not only reading a lot but engaging with what you read.

He then explores classic style, which he calls “an antidote for academese, bureaucratese, corporatese, legalese, officialese, and other kinds of stuffy prose.” Classic style starts with the assumption that the writer has seen something that they want to show to the reader, so the writer engages in a conversation with the reader to help direct their gaze. It’s not suitable for every kind of writing—for example, a user manual needs just a straightforward list of instructions, not a dialogue—but it works well for academic writing and other kinds of writing in which an author explains a new idea to the reader.

Then Pinker tackles perhaps the most difficult challenge in writing—overcoming the curse of knowledge. The cause of much bad writing, he says, is that the author is so close to the subject that they don’t know how to explain it to someone who doesn’t already know what the author knows. They forget how they came by their knowledge and thus unthinkingly skip key pieces of explanation or use jargon that is obscure or opaque to outsiders. And to make things worse, even being aware of the curse of knowledge isn’t enough to ensure that you’ll write more clearly; that is, you can’t simply tell someone, “Keep the reader in mind!” and expect them to do so. The best solution, Pinker says, is to have test readers or editors who can tell you where something doesn’t make sense and needs to be revised.

The next chapters provide a crash course on syntax and a guide to creating greater textual coherence, and though they occasionally get bogged down in technical details, they’re full of good advice. For example, Pinker uses syntax tree diagrams to illustrate both the cause of and solution to problems like misplaced modifiers. Tree diagrams are much more intuitive than other diagramming methods like Reed-kellog, so you don’t need to be an expert in linguistics to see the differences between two example sentences. And though the guide to syntax is helpful, the chapter on coherence is even better. Pinker explains why seemingly well-written text is sometimes so hard to understand: because even though the sentences appear to hang together just fine, the ideas don’t. The solution is to keep consistent thematic strings throughout a piece, tying ideas together and making the connections between them clear.

The last and by far the longest chapter—it occupies over a third of the book—is essentially a miniature grammar and usage guide prefaced by a primer on the supposed clash between prescriptivism and descriptivism. It’s simultaneously the most interesting and most disappointing chapter in the book. Though it starts rather admirably by explaining the linguistics behind particular usage issues (something I try to do on this blog), it ends with Pinker indulging in some peevery himself. Ironically, some of the usage rules he endorses are no more valid than the ones he debunks, and he gives little justification for his preference, often simply stating that one form is classier. At least it’s clear, though, that these are his personal preferences and not universal laws. The bulk of the chapter, though, is a lucid guide to some common grammar and usage issues. (And yes, he does get in a little prescriptivist bashing.)

Despite some occasional missteps, The Sense of Style is full of valuable advice and is a welcome addition to the genre of writing guides.

Celtic and the History of the English Language

Celtic and the History of the English Language