Book Review: What the F 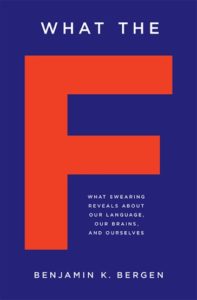 Disclosure: I received a free advance review copy of this book from the publisher, Basic Books.

I was a little nervous when I was asked to review Benjamin K. Bergen’s new book, What the F: What Swearing Reveals About Our Language, Our Brains, and Ourselves. Unlike many of my linguist and editor friends, I’m not much of a swearer. I was raised in a fairly conservative religious household, and I can count the number of times I swore as a child on one hand with some fingers left over. Even now I swear pretty rarely. When someone asked me if I’d like to contribute to the group blog Strong Language (tagline: a sweary blog about swearing), I politely declined simply because I wouldn’t have much to add.

But even for someone with as clean a mouth as me, What the F is a fascinating read. Bergen starts by looking at the different realms swear words come from, like religion, sex, bodily effluvia, and disparaged groups. Most swear words across cultures probably fall into one of these categories, but different categories are weighted differently across cultures. For example, in French-speaking Quebec, some of the most offensive words are religious terms, even though most Quebecois nowadays are not very religious. Japanese, on the other hand, is said to lack dedicated swear words, but it still has ways to express the same ideas.

Bergen then dives into what makes a swear word a swear word, exploring concepts like sound symbolism to see whether there’s something innately sweary about certain words. In English, at least, there are some strong tendencies—our swear words tend to be monosyllabic and end with a consonant, especially consonants lower on the sonority hierarchy, like stops, affricates, and fricatives. That is, a word ending in k sounds swearier than a word ending in m. But this doesn’t necessarily hold across other languages, and it doesn’t offer a complete explanation for why English swear words are what they are. There are certainly other words that fit the pattern but aren’t swears. To a large extent it’s simply arbitrary.

Similarly, gestures like flipping the bird are largely arbitrary too, despite what appears to be some striking iconicity. But rude gestures vary widely, so that a gesture that seems harmless to Americans, like a thumbs-up or an A-OK, can be just as offensive as the bird in other countries. Even swearing in sign language isn’t as symbolic or iconic as you might think; signs for the f-word are quite different in American and British Sign Language, though the connection between signifier and signified is perhaps a little less arbitrary than in spoken language. Swear words are swear words because convention says they are. If you hear people use a certain word a certain way, you figure out pretty quickly what it means.

Some of the most fascinating parts of the book, though, come from what swearing tells us about how the brain works. Most students of linguistics probably know that some stroke victims can still swear fluently even if their other language abilities are severely impaired, which tells us that swearing uses different mental circuitry from regular language—swearing taps into much more primal neural hardware in the basal ganglia. On the flip side, Tourette’s syndrome, which involves dysfunction of the basal ganglia, can cause an overwhelming urge to swear. Some deaf people with Tourette’s feel the same urge, but the swearing comes out via their hands rather than their mouths. And the fact that the brain reacts to prevent us from accidentally saying swear words shows that we have a built-in censor monitoring our speech as it’s produced.

In a later chapter, Bergen debunks a paper by a team from where else but the School of Family Life at my alma mater, Brigham Young University, that purported to show that exposure to swearing actually harms children. Although there’s evidence that slurs can harm children, and verbal abuse in general can be harmful, there’s actually no evidence that exposure to swearing causes children harm. And Bergen ends with a thoughtful chapter titled “The Paradox of Profanity”, which argues that profanity gets much of their power from our attempts to suppress it. The less frequently we hear a swear word, the more shocking it is when we do hear it.

Throughout the book, Bergen maintains a nice balance between academic and approachable. The book is backed up by copious notes, but the writing is engaging and often funny, as when a footnote on the “various other manifestations” of the chicken gesture (“bent elbows moving up and down to depict chicken wings”) led to this Arrested Development clip.

Come for the swears; stay for a fascinating exploration of language and humanity.

What the F: What Swearing Reveals About Our Language, Our Brains, and Ourselves is available now at Amazon and other booksellers.

SHARE:
Book Reviews 3 Replies to “Book Review: What the F”

New Shirt Design: We Can Even!

New Shirt Design: We Can Even!

I started cussing at a fairly young age (eight or so). Nothing was especially sacred in my family, but I definitely used four-letter words to test the limits. One wasn’t supposed to swear around old people, especially old women, but one of my grandmothers was an earthy sort. She and I both hung out in barns and mucked out horse stalls and didn’t find the word “sh*t” especially shocking. Why should “sh*t” be any more shocking than “manure”? I don’t believe that my other grandmother’s sensibilities were anywhere near as delicate as some liked to pretend. In any case I’m now at least as old as my grandmothers were when I wasn’t supposed to swear around them, so I can testify that age in itself has very little to do with it.

I came of age in the mid to late 1960s, started college in 1969, immersed myself in the antiwar movement and various other radical and (eventually) feminist activities, so it’s probably no surprise that I came to see/hear four-letter words as normal. “Far f*ckin’ out” can be said in so many ways! On the whole I use swear words as oral punctuation. I’m surprised when anyone of my age group with similar politics considers one of them off-color or even shocking.

Hi! I came here from Language Log’s blogroll. Our son’s Tourette Syndrome began a couple of decades ago, so I’m a little rusty on the details, but I seem to remember that only about 15% of children with Tourette’s have the symptom of yelling curse words. More often, the disorder manifests itself in physical and verbal tics (e.g., grunts, etc.). Our son would suppress them as best he could in school and then let them loose when he got home. Watching a TS child with physical tics is kind of like watching someone with Parkinson’s.

Thanks for the comment. I knew that not everybody with Tourette’s had the urge to yell swear words, but I didn’t realize it was such a small percentage.