A few days later, a friend linked to this discussion thread on Goodreads started by sci-fi/fantasy author Lois McMaster Bujold. In it, Bujold asked readers to help her with what she called “distributed proofreading” (I’ll just note in passing that the idea of crowdsourcing your proofreading makes my skin crawl), and one reader helpfully pointed out that Bujold had misspelled “whoa” as “woah”. Bujold responded that whoa and woah mean different things, so it was not a misspelling: “‘Whoa!’ is a command meaning ‘Stop!’ ‘Woah!’ is an exclamation of astonishment, rendered phonetically. The original meaning stands.”

I’ve never read anything by Bujold, so I have no idea whether she was being a little tongue in cheek or whether she was simply mistaken. Woah doesn’t appear in Merriam-Webster’s Collegiate Dictionary, The American Heritage Dictionary, or The Random House Dictionary. According to all of these, there is just one word, whoa, that can be used as a command (often to a horse) to stop or as an exclamation of surprise.

The Oxford English Dictionary, of course, paints a more complicated picture. Whoa dates to the 1800s and is a variant of an earlier who (pronounced the same as whoa, not the same as the interrogative pronoun who), which dates to the 1400s. Who, in turn, is a variant of an earlier ho, which was borrowed from Old French in the 1300s. Some of the spellings recorded in the OED for these three related words are whoa, whow, whoo, whoe, hoo, hoe, and hoe. A search for woah leads to the entry woa, which is listed as a variant of whoa, with the forms woa and woah. Dinosaur Comics author Ryan North seems to prefer the hybrid form “whoah”: 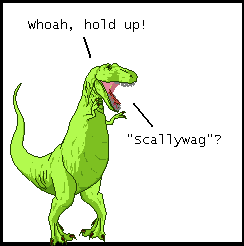 But despite this variation, a search for whoa and woah in the Google Books Ngrams Viewer shows that whoa has been the overwhelmingly more popular form for at least the last two hundred years.

But a search in the BYU GloWbe Corpus, which includes unedited material from the web, shows that whoa occurs at a rate of 2.02 per million in blogs and woah at a rate of .8 per million—not neck and neck, but much closer than we see in the edited material in Google Books. This means that an awful lot of people misspell whoa, and those misspellings are generally edited out of published writing. (Though Bujold’s books are apparently an exception; maybe she talked a copyeditor into letting her keep woah.)

It seems obvious where people are getting the woah spelling: yeah is spelled very similarly, with a semivowel, two vowels, and a silent h. And if you’re like many Americans and don’t distinguish between wh and w—that is, you pronounce which and witch identically—then it’s not obvious where the h goes.

But as Eric Snider noted, many people don’t seem to know how to spell yeah either. The OED says that yeah is a casual pronunciation of yes that originated in the US around 1900. The entry for yeh says much the same thing: “colloq. or dial. var. of yes n.1 or yea v. ” The earliest citation dates to 1920. The entry for yah, interestingly, says that it’s a representation of German or Dutch speech (in both of these languages, the word for “yes” is ja), and the earliest citation dates to 1863. A citation from the London Daily News in 1905 reads, “America..has two substitutes for ‘yes.’ One of them is ‘yep’ and the other is ‘yah.’” I have to wonder if German and Dutch influenced the rise and spread of yeah in American English.

But regardless of its ultimate origin, yeah arose in speech, and so it’s no surprise that people came up with different ways to spell this new word. Still, most people have settled on yeah in edited writing, even though yah and ya are common in unedited writing. I even had a friend who used yeay, and I was never quite sure if this was supposed to be pronounced like yeah or yay or somewhere in between the two. (Interestingly, yay, which arose as a variant of yea, is not found in Merriam-Webster’s Collegiate, though it is in American Heritage and the OED. And surprisingly, it dates to only 1963.)

I don’t expect the situation to change anytime soon. The more unedited writing people read, the more forms like woah and yah will look normal. Editors may continue to correct them in published writing when we get the chance, but people will go on merrily spelling them any way they please.

4 thoughts on “Whoa There”

Couple of points of interest/amusement:

A helpful reader pointed out that Bujold misspelled Whoa as Whoa? What an atrocity!! Look closely.

Rhyming Which and Witch: I daresay all familiar dialects rhyme them. What you mean to distinguish, no doubt, is between dialects that retain the primordial [and correct] h-sound in front of the -w-. The h-droppers, of course, are speaking Slurvian.

German/Dutch-sounding Yah meaning Yes is common in several regions; I don’t know its origin. It is not, however, equivalent to Yeah, which can also serve in snarky contexts while Yah cannot: e.g. Oh yeah? Says who? or Yeah, right.

Side note, not relevant here perhaps: Yea in the King James Bible is the ordinary opposite of Nay (Matt. 5:37).

I’m glad you find my mistakes amusing, though I should note that I fixed them an hour and a half before you posted your comment.